As an enduring gesture to the memory of Sam and Adele Golden and their intricate relationship to the community of artists who skirt the boundaries of contemporary painting, The Sam and Adele Golden Foundation for the Arts was established three years ago. The mission of the Foundation is to become “a meaningful resource for the professional visual artist and a significant contributor to the artist’s support system.” According to the Foundation’s Executive Director, Lucy Funke, great strides were made this year in reaching those goals. “We have provided $14,000 in grants to art organizations and, for the first time, to individual artists as well”, explained Ms. Funke. The awarding of individual grants is an achievement that has been the focus of the foundation since its inception. To facilitate these awards to artists, the foundation has been working to build the necessary infrastructure to create a vital and blossoming contribution to the arts community and it was an important milestone to finally be able to award these first individual grants.

To review the numerous applications from individual visual artists received by the Foundation, a selection committee was formed consisting of John Marciari, Assistant Professor of Fine Arts, Loyola College, Mary Murray, Curator of Contemporary Art, Munson-Williams-Procter Institute, and Frank Owen a professional artist working in paint. Funke remarked “We were so grateful that we could start the process of individual grant making with such a prestigious panel.” The panel reviewed several thousand works and selected three artists, Doug Argue, Creighton Michael and Catherine Kehoe, all innovative painters and working in very diverse techniques, to receive an award of $3,000 each.

Doug Argue paints in both oils and acrylics, and considers scale critical to his work. His pieces range from 4 feet to 22 feet and “the importance of painting as an object that exists in public space,” explains Argue, “make permanent collections very important to me.” The Walker Art Center, the Minneapolis Institute of Arts, the Weisman Museum at the University of Minnesota and the Minnesota Museum of American Art have Argue pieces in their collections and Doug received a National Endowment for the Arts Fellowship in the late 1980s. As Argue describes a current project, he is using copied sections of earlier paintings which he is arranging in sections into one work to be titled “chronology.” The organizing principle of the piece is “inventing possibilities for the images through experimenting with different materials or different configurations of the images. The constancy of the individual images allows me to focus intensely on the physical qualities of the painting.”

“The cognitive, suggestive and collective power of marks,” is the central theme of Creighton Michael’s artistic investigations. In his words, his current work probes “the subconscious for new worlds” as he seeks “to create painting that explores the sensuality of paint while providing a sanctuary for the contemplative viewer.” Creighton has received prestigious awards from the Pollock Krasner Foundation and from New York Foundation for the Arts and has been showing in solo and group exhibitions for 15 years. His process has resulted in the development of a variant Venetian painting technique that relies on an acrylic underpainting that bleeds color through the top layers of oil – resulting in a subdued light that permeates the interior of the oil layers. 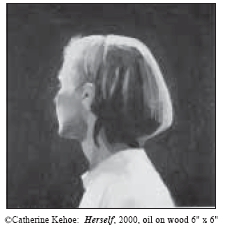 A figurative painter, Catherine Kehoe is “increasingly fascinated with the structure of the body and especially the face, the subtlety of the planes as revealed by light.” Kehoe is an oil painter, specifically interested in painting women over 40. “I am drawn,” she notes, “to the beauty and power of women of this age, a power not diminished by its near-invisibility in our youth-oriented culture.”

Institutional awards were also distributed, totaling $5,000, to four arts organizations whose purpose is to promote and support the visual arts. ArtOmi, based in Hudson NY, received support for their international artist residency program; Triangle, based in Manhattan, received a grant for their artist workshops, which bring painters together from around the world. Ceres, also based in NYC was awarded funds to provide women painters with studio space and artists materials. Preservation for Posterity, a Boston group, received a project grant toward the publication of “A Guide to the Preservation and Storage of Art Archives Lacking a Contemporary Market.”