You are here: Home › Watercolors › QoR Lightfastness Testing Update
By Sarah Sands on October 1, 2015 in Watercolors

In the last issue of Just Paint we discussed why some QoR Watercolors had a Lightfastness rating of NA, or Not Applicable, while most carried the familiar ASTM Lightfastness ratings of I and II. Essentially this came about because some of the pigments being used at that point were not currently rated by the American Society for Testing and Materials (ASTM) although all of them were in the process of finishing up several rounds of tests that would allow them to be submitted for approval. We are happy to finally be able to report those initial results with you.

In sharing this update, there are really two stories to convey. The bigger, and in some ways more important one, is the hope to expand the list of pigments rated by the ASTM Standard for Watercolors for the first time in nearly 20 years. That process will begin in January 2016, when we submit the final test results for 16 new pigments. Alongside that group we will also show results for two colors, Quinacridone Magenta and Dioxazine Purple, which were initially rated as marginal back in the early to mid-90’s. However, both of them have proved to be much more durable in all the current testing, at least within our own line of QoR Watercolors. Hopefully these two examples will provide an opportunity for the subcommittee to create a system to resolve these types of contradictory ratings when they arise. 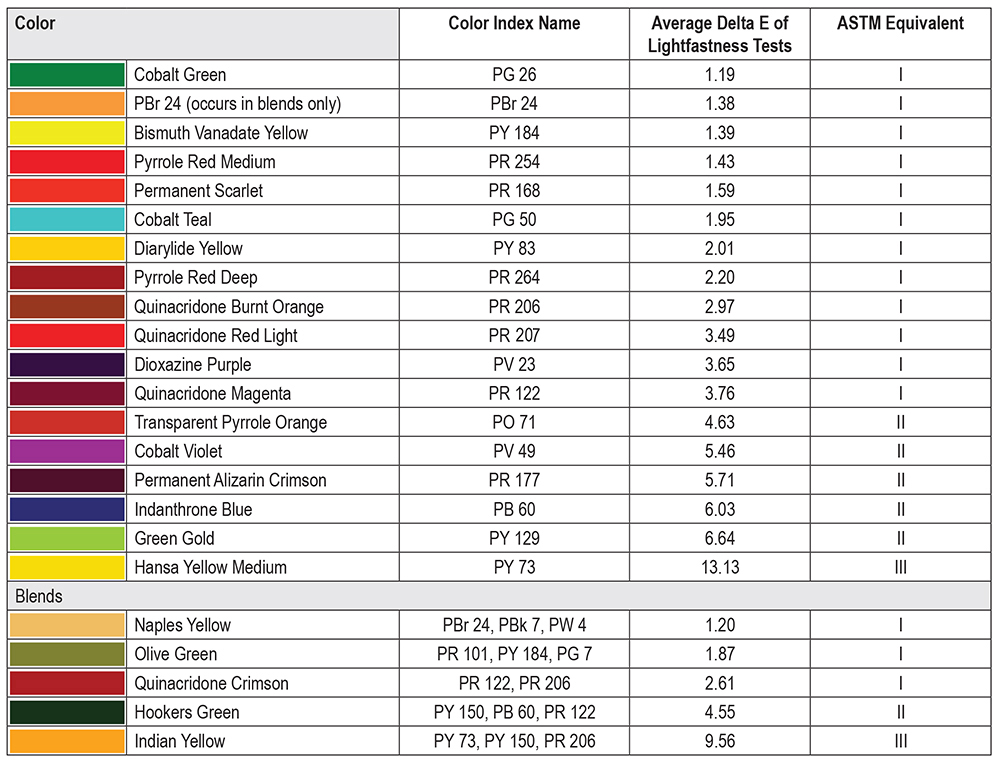 Another part of the broad overview we want to share is simply the sheer scale of the testing involved. Each color must be diluted with enough water to create a very precisely measured pale wash representing a 40% reflectance at the wavelength of maximum absorption. Nine samples of each color were then created: three to be placed outdoors in Arizona, three for accelerated Xenon, and three kept as controls. It should be noted that the Standard currently only requires two samples be exposed in each manner, but we increased it to three to make the results as accurate as possible. Each sample was read by a spectrophotometer in five places before and after exposure, or in the case of the three controls, prior to being kept in storage. Taken together, the 17 single pigment colors plus 4 blends generated a total of 1,575 spectrophotometer readings.

As the first sets of data have come in we have been incredibly pleased by the performance of colors that feel central to the palette of many artists, and which have performed solidly for us in decades of testing in acrylics and more recently, oils. As can be seen in Table I, the majority (10) of the 17 single pigment colors showed excellent durability, achieving the equivalent of an ASTM I rating, while another 5 achieved the equivalent of ASTM II. Two colors of special note include Quinacridone Magenta (PR 122) and Dioxazine Purple (PV 23), which ASTM had listed in an appendix to D5067, Standard Specification for Artists’ Watercolor Paints, as being Lightfastness III or III/IV respectively. However, all six samples of our Dioxazine came in as the equivalent of ASTM I, while averaged results for Quinacridone Magenta were still within current ASTM I standards. Because our ASTM D4303 tests differ so sharply with those previously reported ratings, we’ve chosen to continue to list these two pigments as NA while the matter is reviewed by the ASTM Subcommittee. 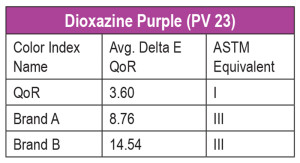 When testing Dioxazine Purple we included the same number of swatches from two major brands of watercolors, prepared in the same way and undergoing the same procedures. As you can see in Table II, both of those brands tested as the equivalent to ASTM III. This sets up something of a quandary, which the ASTM Subcommittee will need to wrestle with. Currently, as the system stands, we can submit our results and ask for the pigment to be reclassified as having an ASTM I rating. However, this would then allow any manufacturer to simply claim that higher rating without having to ever test their specific formulation. Instead, they would only be required to look up the pigment on the ASTM pigment table and report that. However, the types of variations that show up in actual tests, such as the ones with Dioxazine Purple, has led many artists to distrust the current system. Because of that, we believe the subcommittee should consider moving to a formula-based system where each manufacturer would have to have their specific formulations tested. This would allow artists to know that an ASTM Lightfastness rating on a particular color speaks to that formulation by that manufacturer, and not simply the pigment in the abstract or based on testing of one set of swatches from one brand at one point in time. This is an uphill road that will take time to achieve, but we believe it will ultimately serve artists better and provide much more confidence in the value and validity of ASTM Lightfastness Tests throughout our industry. 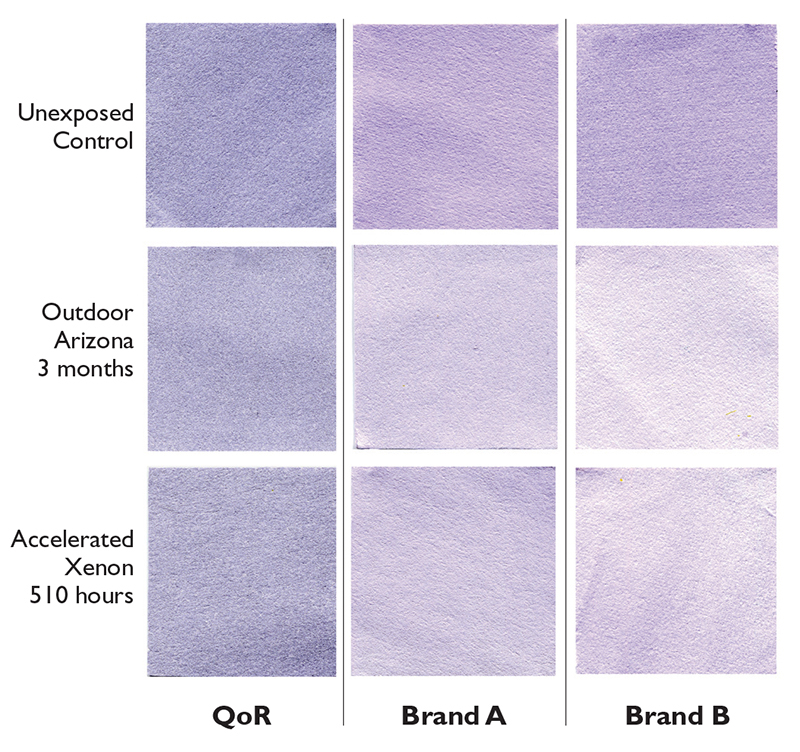 Dioxazine Purple PV 23
Test swatches for different brands of Dioxazine Violet, PV 23.
Current ASTM Standard for Watercolor lists Red Shades of PV 23 as Lightfastness III, Fair, and Blue Shades as IV, Poor. However QoR’s version, which is a bluer shade, tested as the evuivalence of a very strong ASTM I, Excellent.

The one color that was not in line with our expectations, especially given its extremely long history as a reliable color in both oils and acrylics, was Hansa Yellow Medium (PY 73). In this case, both the accelerated Xenon and outdoor tests in Arizona clearly showed it was an ASTM III. Because of these unexpected results, we have decided to discontinue this color and replace it with Benzimidazolone Yellow, PY 154, which has an excellent reputation for lightfastness and carries an ASTM I rating in watercolors. While providing a more durable choice in a similar color space, it is definitely cooler and not as transparent as the Hansa Yellow Medium it replaces, so it will also create clearly different mixtures when blending. The same is also true for Indian Yellow (although to a lesser extent), which has been reformulated with the new Benzimidazolone Yellow in place of the older Hansa Yellow Medium (Image I).If you have purchased either of these earlier colors and have questions or concerns, please contact one of our Materials and Applications Specialists by either phone 607-847-6154 or email help@goldenpaints.com. 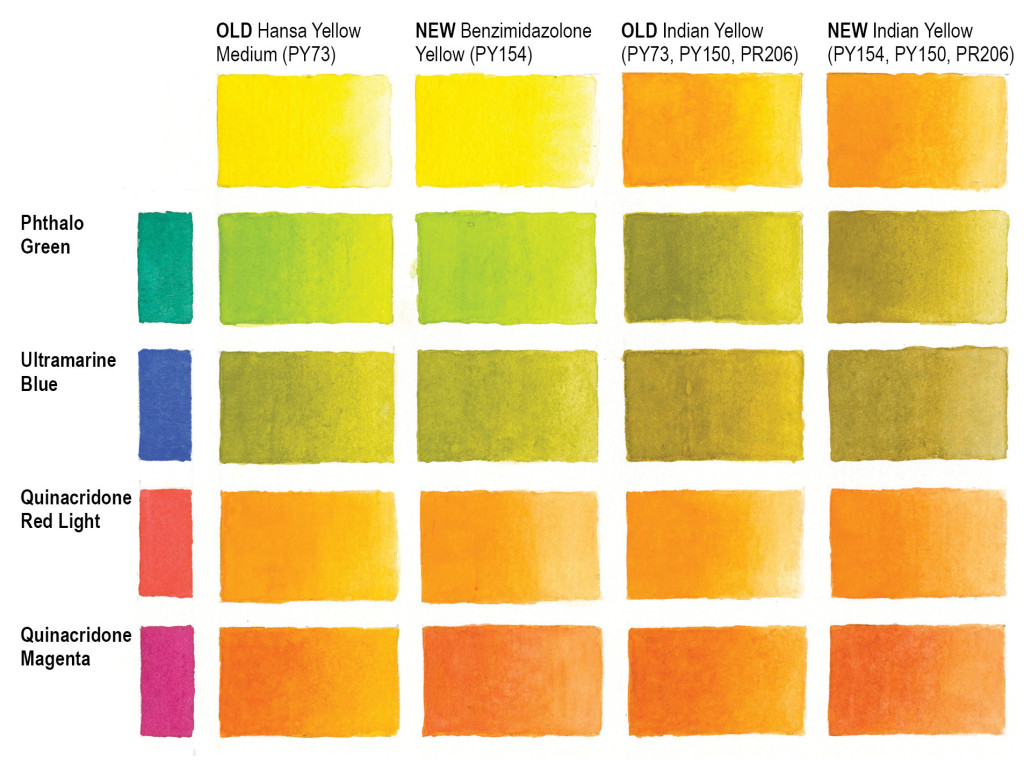 We are delighted to finally be able to share these results with you, despite the disappointment around one of the pigments, and excited as well for the chance to ultimately share our results with the ASTM Subcommittee on Artists’ Paints and Other Materials. Working with members of that subcommittee and other partners in our industry, we hope to strengthen the standards for all watercolors going forward. However, because the process of getting these pigments officially approved can still take a year or more even after being submitted, we felt it was important to have our labelling reflect as much information as possible during this period. Therefore, starting in January, we will implement the same guidelines that will be used by our Williamsburg Handmade Oil Colors, which we share elsewhere in this current issue: namely, colors that are currently listed as NA but which tested as the equivalent of ASTM Lightfastness I will be given an interim rating of Excellent, while those testing as ASTM II will be assigned a lightfastness rating of Good. Once the ASTM approval process is complete, we will then do a final update to reflect the official ASTM Lightfastness ratings. And finally, while we will be making these changes in January, keep in mind that it can take several months for new labels to make their way onto store shelves, as well as be reflected in our printed color charts and other marketing materials. If you have any questions during this period please go to our website, QoRcolors.com for the most up to date information, or simply contact us directly and we will be happy to help.

Solving the Solvents
Beauty and the Best: Wrestling with Changes in Williamsburg