On Saturday, October 6, 2007, the Sam & Adele Golden FoundationSM for the Arts held its second Silent Art Auction Benefit at Golden Artist Colors, Inc. in New Berlin, N.Y. The auction featured artwork from more than 135 of some of the most acclaimed artists of our time, raising $62,700 in proceeds to benefit the Golden Foundation Endowment. The evening was also dedicated to celebrating the Foundation’s first 10 years and the retirement of its Director and longtime supporter of the arts, Lucy Tower Funke. 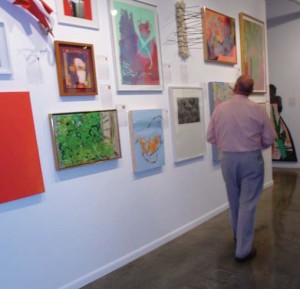 “We are thrilled with the outcome of the event,” said Mark Golden, Golden Foundation President and CEO of Golden Artist Colors, Inc. “The outpouring of support we received from the artist community throughout the last year in order to make this event possible has been incredible. It is through our friends’ unwavering support that has made reaching our Foundation goals possible.”

During the event, retired Foundation Director, Lucy Tower Funke, recounted her involvement in the organization and its importance within the arts community. “As the Golden Foundation charters a new course, I am honored to have been part of the long history of Sam and Adele and the Golden family,” said Funke. “The Golden Foundation has been blessed with the generous support of the artists who have donated significant works of art to benefit the endowment. Their gifts have helped strengthen the Golden Foundation’s purpose to become a meaningful resource for visual artists. Their personal investment has helped to assure that the vision to establish an artist residency program will soon be more than a dream.”

All of the donated artwork remains listed on the Golden Foundation Web site: www.goldenfoundation.org. View it by selecting the “Benefit Art Auction Gallery” tab at the bottom. Those pieces that have been sold are duly noted.