What is an “Experimental Product”?

GOLDEN Experimental Products are a series of limited-production, custom materials made available to the professional artist wishing to engage in experimentation and push the technical boundaries of their work with developmental materials. Although availability is limited, all GOLDEN Experimental Products have passed the basic requirements for freeze/thaw and shelf stability, permanency, adhesion testing to standard products, and general compatibility with other GOLDEN brand products. We believe these products are suitable for fine art use, however, we consider them experimental because proof of long-term performance, lot-to-lot consistency, and reliable availability still need to be established. Therefore, as with all new materials, testing for your application is highly suggested prior to use in actual artwork.

These five new experimental products are innovative in that they take paint and medium characteristics and working properties that may have only been hinted at with existing products, or have not been seen before as desirable, or even possible, and with a combination of newly found raw materials and wizardry in the custom lab…well, ok, a lot of trial and error and hard work…then give them life as innovative products that will push the boundaries of what is possible with acrylic paints and mediums, and in one particular case revive a very ancient marking and drawing medium.

This year we are introducing a new Silverpoint Ground and four new gels that we could only call“Eccentric Gels” for their very unusual rheologies, consistencies and handling properties.

The history of Silverpoint, also called Metalpoint, dates back to before 1560 AD, when the first pencils, as we know them, were invented. The earliest use of metal styli was used to record various business transactions, and this is where silverpoint has its origins. Initially, the marks were made on wax and clay tablets, then specially prepared animal skins, and ultimately paper. The ground was often a mixture of burned bones, ash, chalk, and various other solids. The most common binder was probably spittle. Metalpoint was in frequent use from the late 14th to the 17th century, and was used by many Renaissance artists. 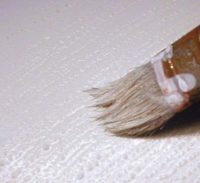 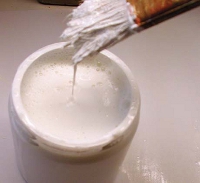 Bubbles and foam will disappear as the ground soaks into the paper. 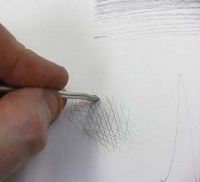 Shape a metal stylus, creating a custom tool for unparalleled fineness of line and detail.

This Silverpoint Ground is provided in a very fluid consistency for easy application and leveling. Not only is this ground easy to apply, but it provides for incredible accuracy of line using a very permanent, lightfast pigmentation and acrylic binder. Additionally, this ground will remain much more flexible over time than traditional preparations.

The easiest way to get started is to dip a good varnish brush (a bristle brush can work as well) into the well-shaken Silverpoint Ground, and apply a thin coat to a piece of hot press fine art grade paper. One will see bubbles and foam as it is brushed, which will eventually disappear as the product soaks into the paper, allowing for a thin, even coat. Let it dry thoroughly and start to draw.

Easily make custom metal styli by taking almost any piece of metal – copper, bronze, nickel, gold, silver, etc. (the harder the metal, the lighter the line, and remember that metals that tarnish will ultimately exhibit that color; copper will turn greenish), and using various metal working tools, such as grinding wheels, files and sandpaper, shape the stylus in various ways.

Silverpoint is still favored today for its permanence (although different metals will leave marks that will change color as they tarnish, and at that point, will be stable), and unparalleled fineness of line and detail. It is much easier to hone a piece of metal into a fine point compared to a piece of graphite or other drawing media.

There is quite a lot of interesting history to mark making, writing and drawing utensils, and for more details, refer to the following links: Silverpointweb article on surface preparation; Wikipedia article on silverpoint

Eccentric Gel Mediums
(The Long and the Short of it)
What can we say about these gels other than you just have to try them? To understand some of their properties we need to begin with some definitions of terms used in the text (that may be unfamiliar):

Rheology – The study of the deformation and flow of matter under the influence of an applied stress. The terms “long” and “short” are used to describe two ends of a spectrum of rheologies. For example, water is short and honey is long.

Dilatant – Describes a material where the viscosity increases with the rate of shear. A dilatant effect can be most commonly seen with a mixture of cornstarch and water (sometimes called “oobleck”), which acts in counter-intuitive ways when struck or thrown against a surface.

Thixotropic – Describes a material which undergoes a reduction in viscosity when shaken, stirred or otherwise mechanically disturbed and which readily recovers the original condition upon standing.

Now that we’ve given a number of wonderful new terms, let’s describe the working and handling properties of the gels, rather than specific techniques. However, in doing so, various effects, techniques and potential uses may become apparent. The gels have several things in common.

Though very different, they are all self-leveling and pourable, so ultimately surfaces will tend to be smooth and tool marks softened. All will dry with a range of gloss surface sheens. A number of other characteristics distinguish them from one another. The gels are listed in specific order starting with the Long Strand (Spider Web) Gel (yes, that’s right) and ending with the Slow Leveling Gel. These two are at opposite ends of the spectrum in terms of rheology. One is very long and the other very short. The remaining two gels are more closely related, have unique combinations of long and short rheologies, and therefore are in the middle of the spectrum. Another thing in common, that will have to play a part in any technique developed with these new products, is that with at least three out of the four gels, the speed in handling them is a major factor with getting them to manifest their multiple working characteristics. 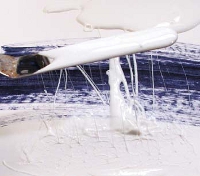 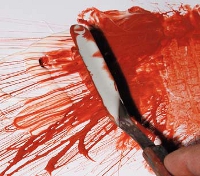 Long Strand (Spider Web) Gel
This gel medium is closely related to Clear Tar Gel in terms of its long rheology, however it is much longer and stickier, and can produce longer and finer strands that can be manipulated and used to “draw” by drizzling with quick movements. If one tries to move the Clear Tar Gel quickly it will tend to break apart, but the Long Strand Gel will keep its long strands and seems to get thinner (thixotropic) the faster it moves. It is whiter and more opaque looking as compared to Clear Tar Gel, and does not dry as clear. A good method for making lots of very fine strands of the gel is to have a small quantity of the gel on a palette surface and to begin dipping the flat underside of a palette knife into the wet gel using a quick up and down motion, while at the same time moving one’s arm forward and backward, keeping one’s hand low and close to the surface. If a painting surface is placed next to the palette, one can move over it directly as this motion is performed, causing the gel strands to fall on the surface. The faster one moves, the thinner the lines, and at a certain point they become like spider web silk. When freshly dried, the film will be gummy, tacky and delicate, but within several days becomes much more cohesive and less tacky. 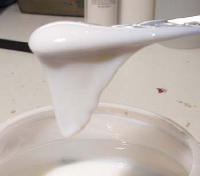 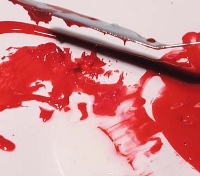 Long/Short Gel
At first, this gel medium appears very similar to our Self-Leveling Clear Gel or Clear Tar Gel, especially when pouring it slowly out of a container, or slowly pulling some out with a palette knife. Very quickly one will notice that with any quick movement it will tend to thicken somewhat and break apart. Stirring it will cause this thickening (Dilatant) effect, and pulling some out very quickly with a palette knife will cause it to “break” in a way reminiscent of Silly Putty, however the viscosity of this gel is much thinner, somewhat comparable to Soft Gel. When it exhibits this “short” or Dilatant characteristic, there will be, for a short time, an actual jagged looking break pattern to the gel. This begins to soften and level out very quickly and eventually will completely disappear. At the same time, it is still possible, with slow movements, to make very long skeins of gel if the tool being used is held close to the surface. There is a more “gelatinous” feel to this gel compared to Clear Tar Gel or Self-Leveling Clear Gel. 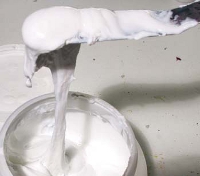 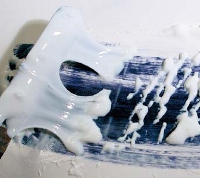 Dilatant Gel
The multiple viscosity properties found in both the Long/Short Gel and Dilatant Gel suggest some very interesting techniques, where a Gel and paint blend could be moved over a surface, using the thicker viscosity that results from this action, and then allowing it to “melt” into itself, creating surface and color patterns not possible with a single rheology product. This gel is a somewhat thicker and more dilatant version of the Long/Short Gel. The dilatant quality will become quickly apparent as soon as one dips a palette knife or other tool into the gel and begins moving it around. The resistance increases and the product thickens as it is moved, yet just as quickly, softens and levels back out when left alone. The same qualities described with the Long/Short Gel will be more extreme with this gel. While working the gel with either a brush or a palette knife, it will appear to coagulate and the resulting textures will tend to be rough, but as soon as it is left alone, it will begin to soften and level out, as if it is melting. 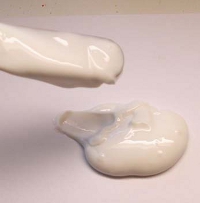 Slow Leveling Gel
This gel seems the most like Soft Gel, as compared to all the others, except that it has more leveling properties and a very short rheology that is immediately apparent when scooping some out of a container. This particular short rheology does not show itself in the same way as in the two former gels, in that it does not “break” in the Silly Putty fashion. When first applied or handled one will see marks which will quickly appear to “melt” away. Ultimately, there will only be faint reminders of any painterly marks and the gel will have the appearance of melted soft ice cream. It is reminiscent, in consistency, of the type of yogurt that has gelatin added, and is quite opposite from the Long Strand Gel.

If three separate batches of this gel are colored with some Fluid Acrylic and applied one on top of another, the three colors will melt into one another and a low domed mass of paint will remain that has an even, gently curved surface with very sharp separation lines between the three colors. When mixed with some Heavy Body paint and applied with a brush or palette knife, the mixture will dry with a wonderful surface and appearance reminiscent of melted wax.

View all posts by Scott Bennett →