Dark yellowing is the reversible, temporary yellowing that dried oil paint undergoes when stored in the dark or subdued lighting. While noted in many historical writings, most painters remain unaware of it and become surprised or concerned when they discover it happening to their own works. Which makes sense. With no other context to go by, it could easily feel like something has gone terribly wrong, or is aging prematurely before one’s eyes. What follows is an attempt to put some of this in context; to show multiple examples so you know what to expect, mention some of the research, and suggest things you can do if you discover this happening in your work or primed canvases.

Despite its long history, surprising little is known about the actual mechanism behind dark yellowing.  We know it happens when oil paintings are kept in dimly lit or dark conditions, and that it can be easily reversed when exposed to light. However, the precise chemical process remains a mystery, at most attributed to the accumulation of some unknown ‘chromophore’ – a generic term for any molecule that happens to produce color. The phenomenon is most pronounced in linseed-based paints, although all drying oils will dark-yellow to some degree. And finally, at least among white paints, the actual pigments can matter, with a clear distinction between Lead, Titanium, Zinc, or a Titanium-Zinc blend.

In terms of scientific research, only a handful of past studies have focused on this topic, which we list in our references at the end. For the most part, despite some differences in approach and sample sets, the studies draw a similar picture: dried oil paint can seemingly undergo cycles of dark yellowing followed by bleaching indefinitely, with variations attributed to the length of dark storage, the age of the film, and the level and duration of light exposure. Joyce Townsend, in the most recent study (2011), suggested that works kept in dark storage or dim light for very long periods would most likely take a number of years of exposure to ‘typical gallery’ lighting to recover.

Our own tests have focused on standard white paints and oil grounds, brushed out or drawn down on different surfaces, without additions of mediums, and either placed completely in dark storage, or else kept in a room with lights on for approximately 12 hours a day, with one section always covered with an opaque strip of black plastic. The light in our application area would be the equivalent of a well-lit workplace or studio with 700 lux of illumination. At the end, all the pieces were exposed to a total of 8 hours of direct bright summer sun to get a sense of the maximum whiteness that could be recovered. Obviously we would strongly caution against exposing artwork to similar levels of direct sunlight, especially if there are any concerns about the lightfastness of your materials.

The first example arranges the four whites most painters use – Titanium, Titanium-Zinc, Zinc, and Flake – from the least to the most prone towards dark-yellowing. In each case, the left side was kept covered for one and a half years, while the right was left exposed. The bottom half of both sides was then exposed to sunlight: 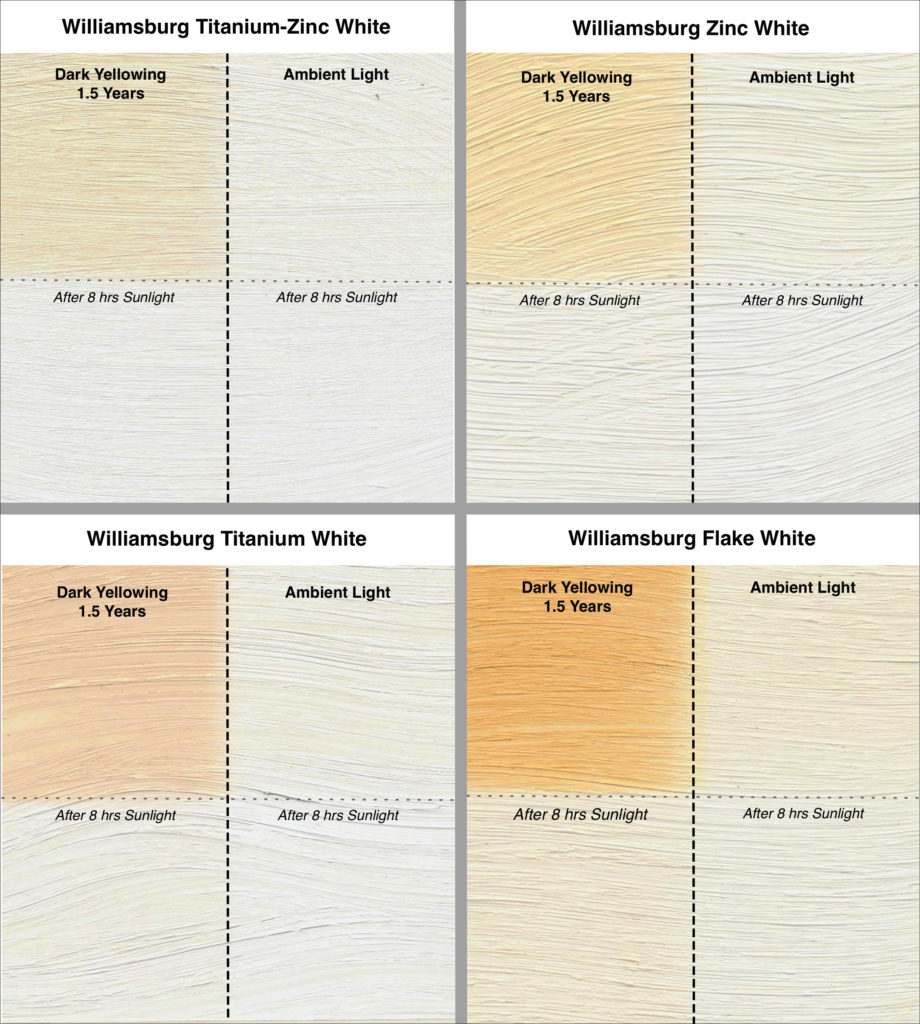 Different Williamsburg Whites Dark Yellowed for 1.5 Years then Exposed to Sunlight for 8 Hrs

The next set shows Williamsburg’s Titanium and Lead Oil Grounds drawn down over a polyester film: 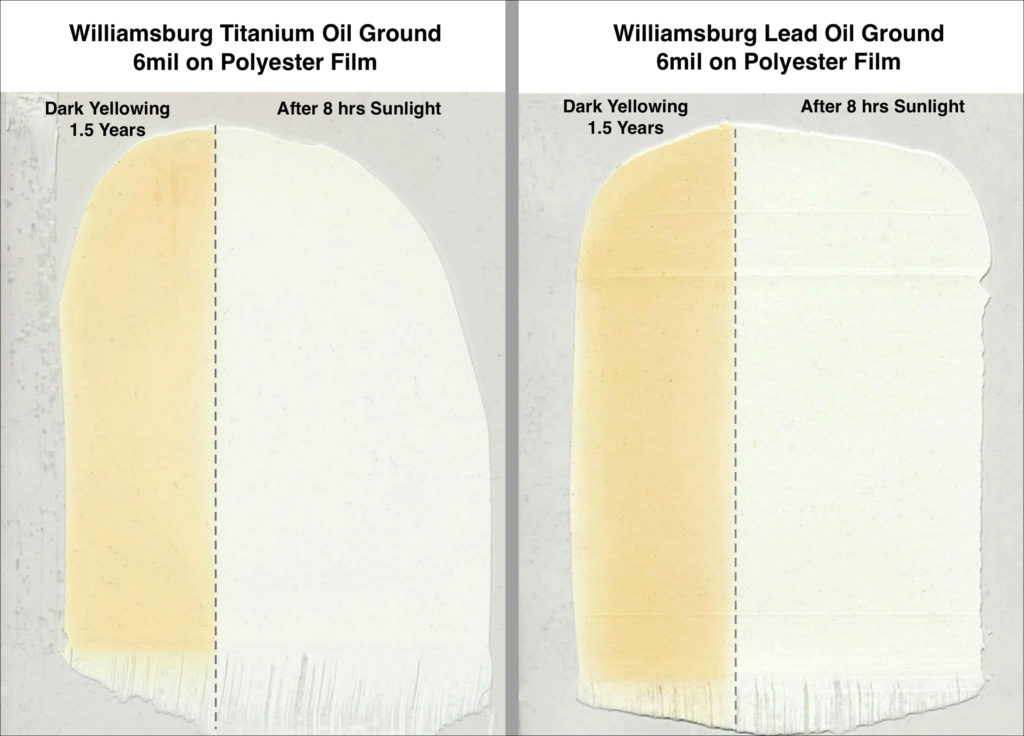 Williamsburg Lead and Titanium Oil Grounds -Dark Yellowing for 1.5 Years then Exposed to Sunlight for 8 Hrs

The following shows a drawdown of our Titanium Oil Ground, at a thickness similar to a heavy sheet of paper, over acrylic Gesso: 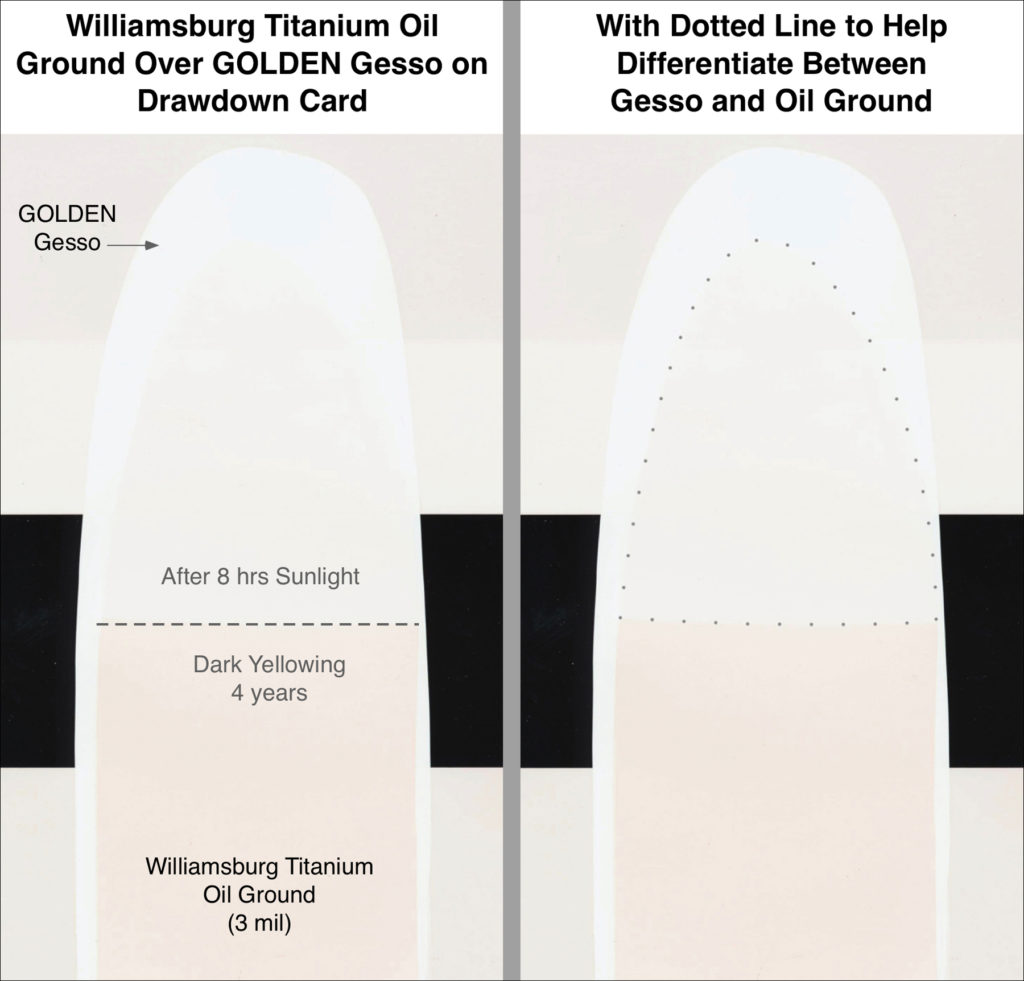 In this last example, an oil primed canvas was brought out of dark storage and covered with discs that allow different amounts of light exposure: opaque black plastic, white card stock, and three translucent, neutral gray films rated to transmit 20%, 40%, and 80% of the light, while the surrounding oil ground was exposed to 100%. After 9 months the discs were removed. You can see how the results are directly tied to the amount of light: 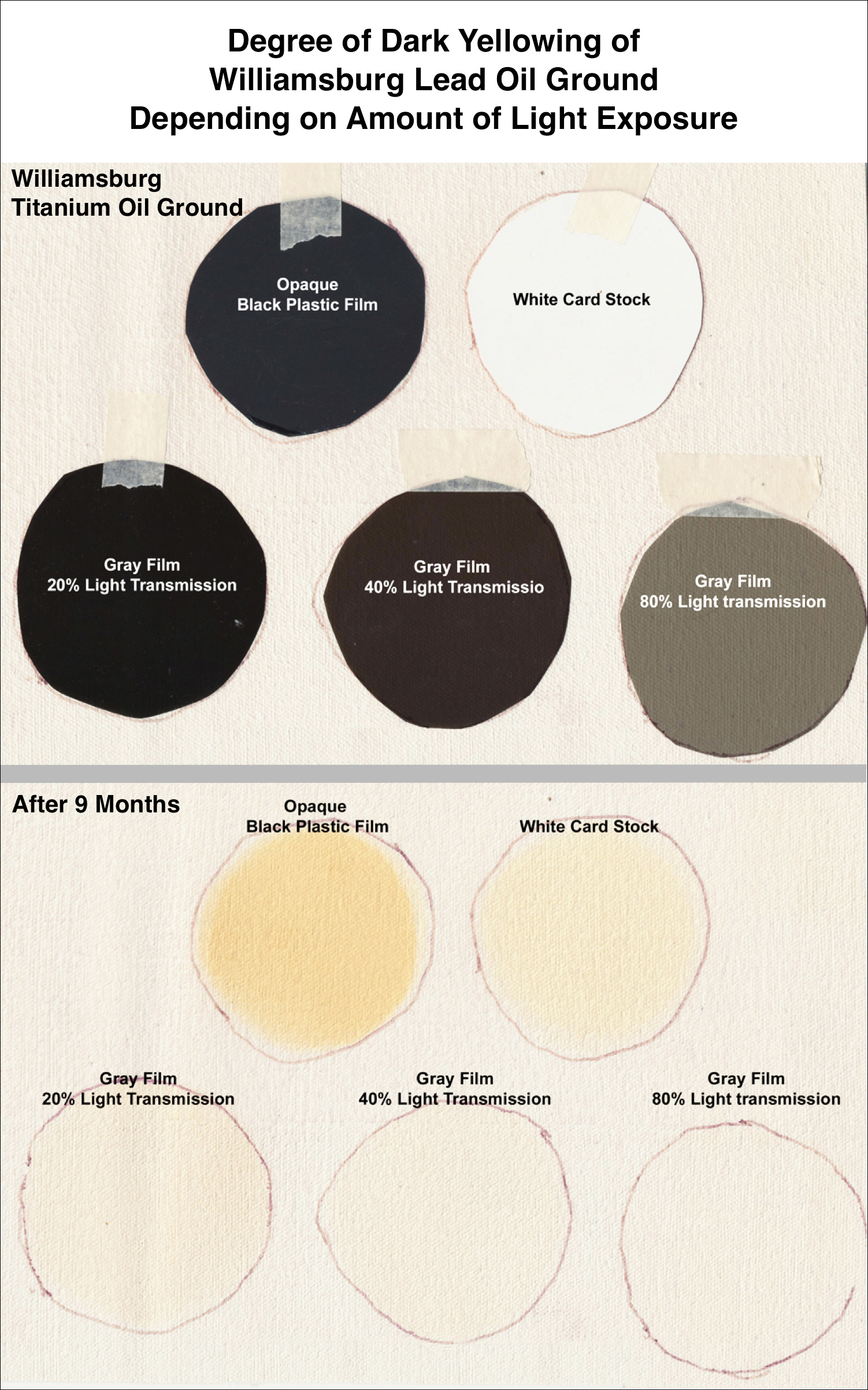 If paintings or grounds become yellowed while kept in a dark area, remember that most if not all of this is temporary and reversible. It is a normal part of the medium and something that has been well-known for centuries. To reverse or prevent these effects, follow the following guidelines:

21 Responses to What is Dark Yellowing?