You are here: Home › Acrylics › New Testing Results of OPEN Acrylics
By Michael Townsend on September 1, 2009 in Acrylics 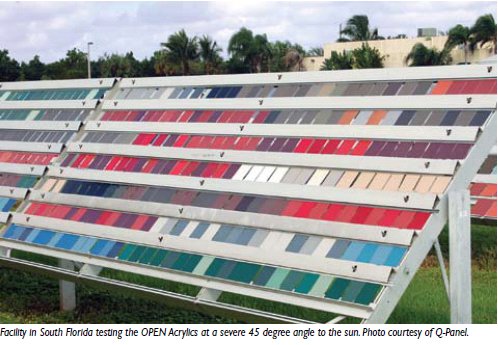 Prior to being launched, the new line of GOLDEN OPEN Acrylics underwent a battery of testing to assure it met our standards as a professional artist product. These tests gave us a vast amount of data about the properties of this unique paint and valuable knowledge regarding its working properties. This information helped us finalize the paint formulation and also provided a resource for our product literature to assist artists interested in introducing OPEN Acrylics to their paint box. As artists expanded the uses of the OPEN Acrylics, new questions were brought up which gave rise to continued testing and evaluation. In this article we’ll share the most current real-time results, as well as discuss some observations based on our testing.

Product permanency testing is a key part of any new material being created. This testing helps assure the paint is able to hold up over time. While the pigments used to produce OPEN do not vary from those used in the other GOLDEN paint lines, there are ingredients unique to OPEN, and so each color was carefully tested using both natural and artificial accelerated lightfastness testing. Accelerated lightfastness testing is one of the key determiners of a product’s durability and during the initial developmental stage all the colors were assessed according to ASTM standard test parameters for lightfastness as well as the integrity of the exposed paint films.

GOLDEN relies on two types of accelerated artificial light devices. A Q-Panel Weatherometer bombards test panels with ultra violet (UV) light by means of UV-A 351 fluorescent bulbs and a Xenon Arc machine using bulbs filled with ionized xenon gas. Together they give us two reference points to increase our confidence of the overall stability to the damaging effects caused by exposure to the wide range of visible and the even more destructive range of radiation below visible in both natural sources of sunlight as well as UV radiation given off by artificial lighting such as fluorescent lighting. The general idea is to simulate what one might expect the products to look like after about one hundred years, give or take 50 years, as this science is just not exact enough to give extreme levels of confidence. (See Just Paint #14 for more information about Accelerated Weather Testing.)

While accelerated permanence testing is fine for a base understanding of the anticipated permanence of a product, real-time exterior exposure is always a greater confidence building exercise of paint’s durability. But who is going to wait for the results to come in? We have committed to lengthier exterior testing to gain some greater confidence in the results from the accelerated testing. One of the most extreme locations for this kind of testing is southern Florida. The mixture of moist salt-laden air and UV rich sunlight can wreak havoc on any coating. 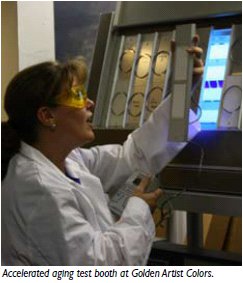 While the tests we evaluated according to ASTM standards involved approximately three months of exposure in this environment, we are continuing with longer sets of exposure. At the time of this writing we have fully evaluated nine months’ exposure on the OPEN test panels that were returned from sunny Florida. The task at hand is to identify any changes to the paint film. Visual assessment is especially important to judge film changes such as cracking, erosion and clouding or hazing. We look for surface degradation, adhesion failure and color change. Gloss readings are taken via instrumentation to track gloss changes. Differences in color change can be the result of pigment fading, pigment darkening, and also binder change. Typical measurements are compared to a control unexposed specimen to evaluate the total change in collor (Delta E) and the full CIE L*a*b* color space data.

As these surfaces are exposed to an outdoor environment they tend to be coated with grime. The paint layers are first cleaned prior to taking sample readings on a color spectrophotometer.

After conducting and evaluating the QUV, Xenon Arc and southern Florida exposure testing, we have found that the OPEN Acrylics behave very similarly to the Heavy Body Acrylics. As we are using the same pigments in both systems, the overall characteristics regarding lightfastness are in line. The only consideration here is that the OPEN film takes much longer to form. Exposures of films in exterior applications before complete film formation occurs (measured in months, and not days) can show severe film degradation, resulting from an incomplete film formation. However, if the same paint films are allowed to cure well, they behave quite similarly to our other acrylic paints.

Overall our findings show the OPEN colors are holding up as expected and in parallel to our other paint lines. The three points of testing – QUV, Xenon Arc, and real-time exterior exposure – conclude the product line is a robust paint film.

These test panels were cast and allowed to fully dry for 30 days before being sent down to the test location. This is different than what can be done on site during an exterior mural painting process.

If an artist were to use OPEN for an exterior mural, it’s far too likely the paint would be exposed to rain, humidity or dew, resulting in bands of color streaking down and ruining the image. Considering our current recommendation is to allow for 30 days of curing time prior to varnishing, it’s easy to realize even the most pristine climates are not likely to have perfect weather for a couple of months running. All of these concerns lead us to one conclusion: OPEN Acrylics are not wellsuited for direct exterior mural painting.

What would be acceptable is simply painting the mural on a suitable exterior quality substrate (such as M.D.O. plywood, aluminum panel or exterior rated mural cloth) in the studio. After it has been allowed to cure indoors and has been properly varnished with GOLDEN MSA Varnish, then the work may be displayed outside.

The Effect of Substrate on the Working Time of OPEN

When asked about the expected working time of OPEN we hesitate to give an actual number because of the large number of variables influencing such a statement. It is near impossible to accurately predict what the combination of temperature, humidity, air-flow, film thickness, and other factors contributing to working time will allow each artist to achieve. When we do make such a statement of expected working time, as in the OPEN Acrylics Product Information Sheet, it’s done under a set of controls. Not very many artists apply paint using a 10 mil drawdown bar on lacquered cardstock.

The better question to ask when it comes to working time is, what are the controllable factors to achieve maximum working time? The list becomes shorter immediately. Within a painting studio it is possible to reduce the temperature and increase humidity. Of these two, humidity is the one factor much more likely to influence OPEN’s working time. The higher the humidity, the slower the paint film’s water and other additives’ evaporation rate will be.

Film thickness is also a large contributor when discussing working time. It is important for us to remind everyone about the other impacts this has for the artwork. Thicker paint layers do dry slower, but may in fact be a lot longer than one first bargained for. In testing where we looked at films 1/4″ thick, the paints literally took several months to become tack free.

Airflow is a factor that is somewhat overlooked, and yet our lab studies have shown it to be one of the most influential contributors to the rate of OPEN Acrylics drying. Moving air assists water, retarders and other additives in escaping the drying paint layer. One should have a good rate of air exchange in the studio, but avoid fans or other air sources from blowing directly onto the painting, unless of course you want it to dry faster.

There is a large variety of substrates an artist can choose to use for painting. Controlling absorbency does not mean one has to abandon a favorite, but it does mean choices need to be made on how the painting is composed. If absorbency is ignored, then every other factor including the paint formulation is unable to achieve a long working time. One simply cannot expect maximum painting time when the highly absorbent surface is wicking away all of the slow drying additives.

Sealing the surface with faster drying paints or mediums is the most practical solution when working on absorbent surfaces. When and how the artist seals the surface is really up to their needs. When painting on watercolor paper, washes of color may be desired. This can be done with Heavy Body Acrylics or Fluid Acrylics. Once the washes are complete, then the paper can be sealed with acrylic medium to serve as a translucent sealer. Alternatively, a more opaque under layer might be desired. The same Heavy Body or Fluid Acrylics can be used to block in color and establish the base painting and because they dry readily, the OPEN Acrylics can then be used almost immediately for the detail work. Still another method for reducing absorbency is to use an acrylic medium as a sealer before any paint is applied. Whatever seems the best approach at the time is the one to go with.

This doesn’t mean one absolutely has to seal the surface with a medium or paint before working with OPEN. It just means the first layers should not be expected to yield the full potential working time. Sure, the absorbent surface is still wicking the additives from the paint causing it to set up fast, but if the artist continues painting, the process eventually results in a sealed surface and subsequent paint layers then begin to have a greater working time.

Michael has worked at GAC since 1989, starting in Quality Control, progressing to R&D, Custom Lab work, Applications Testing and investigating the properties of the vast array of pigment and binder. Currently a Materials Specialist focusing on consulting with artists worldwide on their artistic endeavors. A painter, writer, and father to 3 boys who remind him daily to enjoy and appreciate life.
View all posts by Michael Townsend →

Realizing the Possibilities of Digital Transfers & Acrylics
Jackie Battenfield – The Artist’s Guide: How to make a living doing what you love.