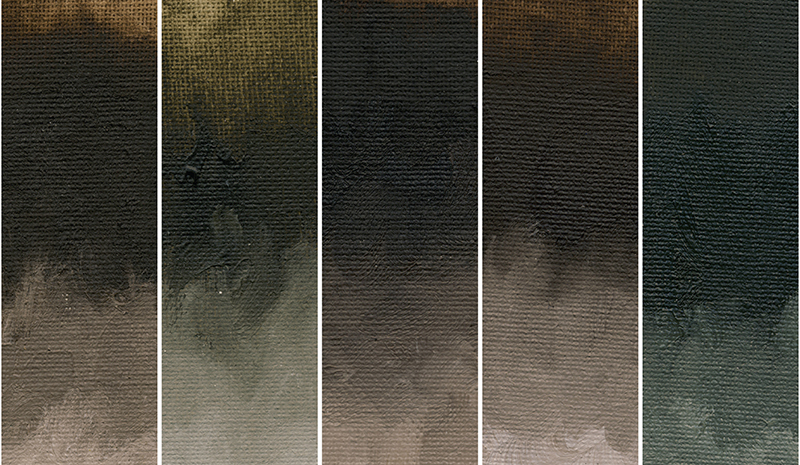 From the earliest times, the darkest shades of natural brown earths, known as Umbers, have been a part of the artists’ palette. Ranging in tones from the greener Raw Umbers, which produce a range of neutrals when mixed with white, to the warmer, dark chocolate notes of Burnt Umbers, which create tans and tawny beiges in tints. While rarely mentioned in documents on western painting before the end of the 16th century1, the Umbers decidedly took center stage during the Baroque, where they played a major role in paintings by Caravaggio, Rubens, Rembrandt, and Van Dyck. Relied on for developing deep darks and rich browns, they cluster near the neutral center of most color wheels, the more muted cousins of the prismatic reds and oranges that range above. And while they have a long and storied history, they continue to be seen as essential in every medium, including watercolors, oils, acrylics, and pastels.

The name Umber comes from the Italian, Terra d’Ombra. Although it is often suggested that the color derives its name from a mountainous region in Italy, Umbria, it is more likely derived from the Italian word for shadow, ombra, in reference to their natural darkness and depth.

In terms of composition, Umbers contain oxides and hydroxides of iron and manganese; the manganese, in particular, separating them from other iron oxides like the Ochres and Siennas. Umbers tend to be quite variable in the exact proportions of iron to manganese, which gives rise to all the subtle differences in color and behavior that artists prize and seek. While on a microscopic level the two types of Umbers might be similar, the process of roasting, or calcining, the Raw Umber at very high temperatures in the presence of oxygen changes the iron hydroxides into iron oxides (iron III oxide). The result is a much warmer, reddish brown. Umbers are very permanent with excellent stability to light, moisture, and alkali and dilute acids, making them a good choice for exterior usage. In oil paints, the manganese content of Raw Umber has a siccative effect, making the Raw Umber an effective drier.

Like other natural earths, Umbers can inspire a passionate following of artists who are true connoisseurs of all the subtleties that different regions and locations will provide. Within our lines of paints, we work with eight Umbers sourced from Italy, France, Cyprus, and the U.S. Some of the most valued umbers come from the Troodos Mountains in Cyprus, where the deposits were formed by the weathering of volcanic pillow lavas that contain iron and manganese. The highest levels of manganese (up to 12%) are found in the Cypriot Umber, while lesser amounts (5%-11%) are in the other regions.

Endnotes
1 The first mention of umber was in 16th century Italian treatises. It was unique at the time because the other browns available were transparent and organic (from asphaltum and mummia). In the early 17th century there is mention of calcining the umber before use, hence Burnt Umber. Although the name did not exist, there are iron oxide and manganese pigments found in the tomb of Nefertiti, Pompeii, 6th century Korean Tombs, Japanese tombs, and medieval English wall paintings.

Congratulations to the 2015 GOLDEN Educator Residents!
From Mark Golden

3 Responses to In the Shadows