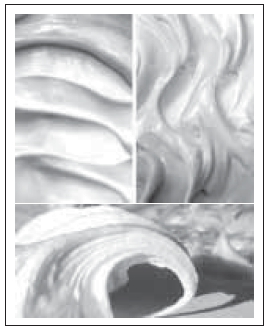 Artists are often asking why our product is called “Molding Paste” while everyone else’s is called “Modeling Paste”, and is there any difference? First, I have no idea why the product was called Molding Paste. It can be placed in a mold, but it wasn’t particularly developed for that purpose. Molding Paste is what Sam Golden called a similar product at Bocour and he simply carried the name forward to his new company. GOLDEN Molding Paste is made similarly to other brands of acrylic modeling pastes. Basically, they are all a medium of acrylic polymer that is filled with hard solids.

Molding Pastes are probably one of the more commonly used products when working with acrylics or providing a base for other media. They can easily be worked with a brush or pallete knife and readily mixed with acrylic colors. GOLDEN Molding Paste is often used to build texture and depth before subsequent application of additional colors. It is the “auto body filler” of acrylic paints. Sam once actually used it for filling a gap in the back fender of his beat-up station wagon. He said the stuff lasted for years.

Currently, three products make up the range of GOLDEN Molding Pastes. They all have a thick consistency derived from the high levels of added solids. For Molding Paste and Hard Molding Paste, these solids include marble dust, a large particle-size calcium carbonate. Calcium carbonate imparts significant whitening and is also often used to create the tooth in acrylic gesso. The solids in Light Molding Paste include hollow spheres which provide even greater whitening. All of these products dry to a fairly opaque white or light buff-gray. It is this opacity that makes them quite different to work with than other mediums, especially when adding color.

The Molding Paste Choice: Mix Color With It or Apply Color Over It.
GOLDEN Molding Pastes tend to tint colors that are added to them. This can be overcome by adding a large amount of color, but in doing so, many of the attributes for which the artist might have chosen the Molding Pastes may be diluted. This tinting property is most noticeable when mixing with reds. When adding a small amount of any red to any Molding Paste, the resulting tint is always pink. This is not as great a problem in the other hue ranges. It is quite possible to get a deep blue, green or purple using Anthraquinone Blue, Phthalo Blue, Phthalo Green, or Dioxazine Purple. It is also possible to get brilliant yellows, especially when mixing with Cadmiums, because of their incredible opacity. If a red is desired, the most promising route is with the Pyrrole Reds, because they have the greatest tinting strength.

Molding Paste may be applied as a separate layer and subsequently painted. The Molding Pastes accept such application of color with great ease. They have excellent tooth and great absorbency, which can be exploited with a wide range of techniques. GOLDEN Molding Pastes are quite thick.

Preparing Substrates for Molding Pastes
When using these materials, it is important that the support be properly prepared. A ground of gesso or size of thin acrylic medium should be applied. Alternatively, the Molding Paste may be thinned with a fluid acrylic medium or an acrylic/water mixture and applied as a ground. This will assure good bonding with the support. If it is necessary to use Molding Paste without thinning or prior sizing as a ground, it is essential that the product be forcefully brushed or otherwise pressed into the substrate. Like other acrylic paints and mediums, the Molding Pastes will adhere best to absorbent surfaces like canvas or wood. They will not adhere to greasy or oily surfaces. It is also best to roughen up slick surfaces to increase the tooth, making the surface profile rougher for additional bonding.

From Light to Hard: 3 Molding Pastes Provide Options for Artists
GOLDEN Light Molding Paste was originally developed for an artist who needed to support sculpted canvas forms arising from the surface of her paintings. Using normal Molding Paste to fill the large voids resulted in incredibly heavy paintings. We were requested to make a material that would have the support capability of Molding Paste, but at a reduced weight. Even though the resulting product is only 1/3 the weight of its heavier cousins, it will hold peaks that are much higher and more detailed than either the Molding Paste or Hard Molding Paste. It has a consistency between cake frosting and shaving cream and can be shaped quite readily. As with the other Molding Pastes, shrinkage is minimal due to its high solid load. Light Molding Paste dries to an extremely flexible film, which can be rolled without cracking. It is also very absorbent and works exceptionally well as a ground, to create stain effects using thinned acrylic colors. 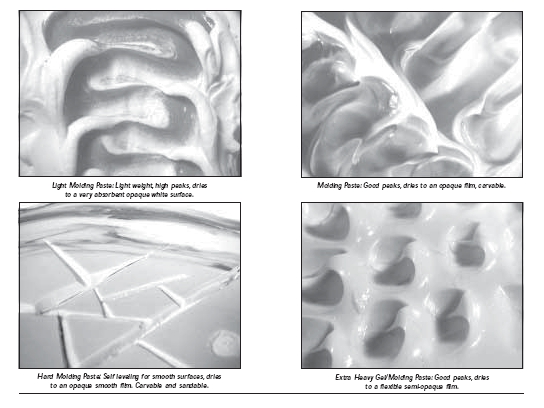 GOLDEN Molding Paste dries a great deal harder than Light Molding Paste. It will dramatically increase the stiffness of a flexible support and provides a harder surface to work against. Unlike Molding Pastes from most other manufacturers, it can be rolled without cracking. It dries to a light gray finish and is not as opaque as the Light Molding Paste, so less color is required to overcome its tinting ability. The surface of Molding Paste has a fair degree of absorbency which will allow for the application of stains of thinned down color. It also provides great adhesion for subsequent coats of acrylic colors. Molding Paste will not hold high peaks unless puddled in large quantities.

GOLDEN Hard Molding Paste was developed for artists who wanted to sand down the acrylic paints. Anyone who has ever put sandpaper to acrylic paint knows the frustration of trying this. The paint film begins to heat and soften because of the friction, quickly gumming up the sandpaper. Hard Molding Paste can be used to modify acrylic colors, making them more readily sanded. When used by itself, Hard Molding Paste can be sanded to an incredibly smooth, almost glass-like surface. Among other things, this allows an artist to prepare a variety of surfaces for drawing techniques. In addition
it can be shaped with a knife, carving tools, electric sanding equipment and drills. This allows for subtractive techniques when working with the dried paint. Typical acrylics are much too flexible for carving and tend to bind even the sharpest razor blades and knives. Hard Molding Paste dries to a light gray color. It is quite absorbent like the Molding Paste and will accept overpainting readily. However, it forms a more brittle film and, unlike the other Molding Pastes, if this product is applied to a flexible support, it should not be rolled. Cracking will potentially develop if used on an unsupported flexible substrate. Hard Molding Paste has self-leveling qualities not found in other Molding Pastes. High peaks formed in application will settle out before it is completely dry.

Molding Paste Maintenance
Care should be taken when using any of the GOLDEN Molding Paste products without a protective final coat. Because of their absorbency, it is quite possible that dirt, pollution or finger marks will leave stains. It is best to consider using a sealing coat and a final varnish if these materials are exposed on the surface of the painting. Also, as with all acrylics, avoid rolling, hitting or banging them in cold weather, as it is very possible to crack the cold acrylic film.

One Response to GOLDEN Molding Pastes Offer Many Textural Options!