As of April 5, 2010, Golden Artist Colors is now under new ownership. Employees are no longer just participating owners, but the majority owners of the company. GOLDEN has become one of only 4,000 other companies across the entire United States that is majority owned by its employees.

“This has been an unbelievable journey for all of us here at GOLDEN,” said CEO, Mark Golden. “Since the beginning, we have tried to create an environment where people can thrive, believing that if the people thrive, the company will too. These philosophies lead us to establish an Employee Stock Ownership Program for Golden Artist Colors in 2002, providing a tangible way for employees to not only act and feel like owners, but to be owners. Now just eight short years later, our dream of majority ownership for staff has come true!”

“Together as employee owners, we work diligently to nurture and grow the company,” said Filling Technician and Trainer, Andrea Bice. “It’s exciting to know that each and every one of us has the opportunity to positively affect a legacy that has been entrusted to us by Mark and Barbara Golden.” 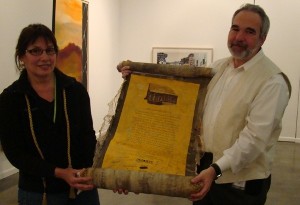 “The major difference of an ESOP company isn’t in the daily business routines,” said Operations Manager, Greg Sheldon. “It’s when the work load pressure increases and everyone focuses harder on their job. This level of intensity insures that promises made to our customers and ourselves, are honored, regardless of the magnitude of the job. There is pride and accountability with ownership that is absolutely a powerful advantage we have being an employee majority owned company!”According to company President & COO Barbara Schindler, this was a natural step forward for the company. “GOLDEN is a leader not only in the development of fine art materials, but in employee growth and support as well and it’s paid off,” said Schindler. “Participating in an ESOP has been incredibly motivational for staff, and this has resulted in a marked improvement in performance for the entire company.”