We are surrounded by units of measure we rarely give a second thought to; common scales and rulers that parcel out the world in units of ounces and inches, meters and miles. But alongside these are others we rarely use, or could easily explain in any precise way, such as centipoise and mols, decibels and pascals. Even the overly-familiar calorie, long before appearing on food labels or menus, is technically defined as the energy needed to raise a gram of water one degree Celsius at a pressure of one atmosphere. Who knew? And into that murky zone we can also plop ‘Delta E’, a term people will constantly encounter in lightfast testing but which is rarely defined.

Put simply, Delta E is a single number that represents the amount of difference between two colors, or if testing a single swatch, the amount of change that particular color has undergone. Sometimes abbreviated as dE or ∆E, it is a combination of the Greek letter delta, used to signify change in mathematics, and E, which comes from the German Empfindung, or “sensation”. So literally, it measures the amount of change in a sensation. 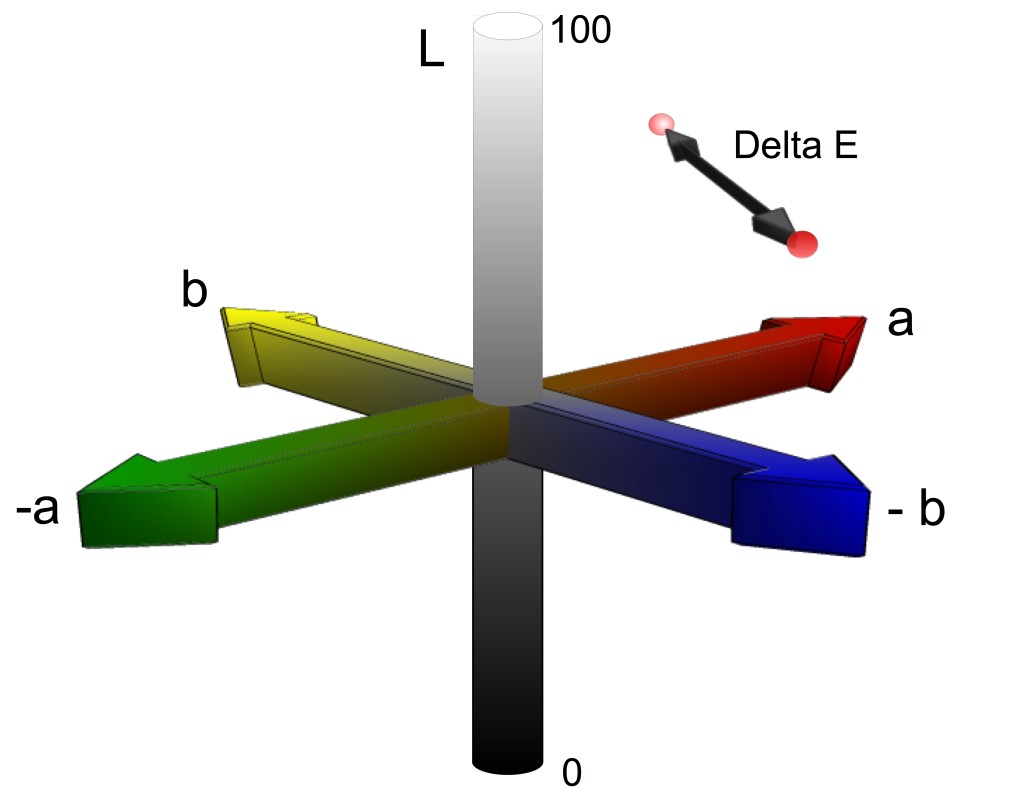 Image I: Model of CIE Lab space showing an example of Delta E as the distance between two colors.

One calculates Delta E using a spectrophotometer which can ultimately translate a color into three variables plotted along the three axis of a standardized color space known as CIE Lab, or more precisely, CIE L*a*b*. Those axis represent Lightness (L), Red-Green (a/-a), and Yellow-Blue (b/-b). Once you have two sets of these coordinates, taken for example from a swatch before and after being exposed to accelerated UV, you can easily calculate the distance between them in three dimensional space. It is this distance that we know as Delta E. (Image 1)

Over the years there have been various attempts to improve the way one calculates Delta E, trying to get the formula to ever more closely model the way a theoretical person (known as the ‘standard observer’) would see a similar difference. This is particularly true when trying to optimize the calculations for specific fields, like textiles or graphic arts. For our purposes, however, ASTM still relies on the original system, known a CIE 1976, or dE76, when determining the lightfastness of artists’ materials. It should also be noted that all of the various systems define a single unit of Delta E as the minimum amount of color difference a standard observer could recognize.

While CIE 1976 gave the ASTM Subcommittee a way to measure how much a color changed when doing broad testing that led to the original 1977 draft of ASTM D4303, “Standard Test Methods for Lightfastness of Colorants Used in Artists’ Coloring Materials”, the problem of translating those numbers into Lightfastness categories still remained. In other words, how much can a color change or fade, how many Delta E’s can it have and still earn an ASTM Lightfast rating of I, II, III, and so on? Ultimately the ranges were informed by three things: the amount of change seen in specific, well-known pigments found on historical paintings, in particular rose madder and alizarin crimson, correlation with the much used but less rigorous Blue Wool Scale, and the amount of tolerance needed to account for all the uncontrolled variables, such as the small differences in sample prep and test placement, that can sometimes cause a difference of several Delta units between ostensibly identical swatches.

Taking all of those things into account, the ASTM Committee in 1977 examined results from 92 different pigments made in both oil and acrylic, then subjected to varying exposure times in both Xenon Arc and High Output Fluorescent accelerated test chambers, as well as two outdoor testing facilities in Kansas and South Florida. From those tests emerged the following ranges, as well as their rough Blue Wool equivalents, which are still used to this day:

The question still remains, though: just how much visual change does all of this represent? In Image 2 we illustrate what you would see as you pass through each of those categories. As expected, a single unit of change, where Delta E = 1, is a small and subtle difference; however, by the time one gets to Delta 4, the change has become distinct and noticeable. By Delta 8, the degree of difference is definitely substantial, while above that, one can understand why ASTM III colors such as Alizarin Crimson are considered Poor in Lightfastness and not recommended for permanent works of art.

Seeing the amount of change allowed for each of the ASTM Lightfastness Categories might come as a surprise for many people who have come to expect that Lightfastness I means a color will not fade or change to any degree, or at most show a subtle and ‘just noticeable’ difference. It is important to remember, however, that ASTM Lightfastness testing is not meant to be predictive in the narrow sense that a result of Delta 3.8, for example, will mean unequivocally that a similar swatch of color on a particular work of art will display that degree of change after x number of years. There are simply too many variables at play, and besides, only a handful of pigments have even been around long enough for that type of precise correlation to be remotely possible. Keep in mind that ASTM Lightfastness testing is extremely harsh, with colors being exposed to very high levels of UV and visible light in a very compact, short period of time. While the levels of exposure were originally set because the results corresponded to the amount of change seen in 100+ year old samples of rose madder and alizarin crimson, among other historical pigments, whether that relationship will be equally tight for many of the more modern pigments remains to be seen. And again, it is important to note that a pigment that might show a Delta E of 1 or 2 in one set of tests, or at one point in time, could show slightly different results of a Delta 2 or 3 in additional testing for a host of reasons. So it is critical to set ranges wide enough to account for that. In the end, it is helpful to realize that many pigments considered among the most durable, both historically and by experts in the field of materials and color science, have consistently fallen within the 0-4 Delta E range when undergoing this testing, so for now, at least, those remain the pigments that are your best bet when creating artwork that is as permanent and durable as possible.

12 Responses to Delta E: A Key to Understanding Lightfastness Readings