You are here: Home › Acrylics › Defining “Luminous Effects”
By Sarah Sands on December 1, 2004 in Acrylics

This article examines the technical aspects of creating “luminous effects” in acrylic painting. By “luminous effects” we primarily refer to the use of transparent layers, called glazes, to create a sense of luminous, glowing color and depth. We will not touch upon Fluorescent or Phosphorescent pigments, which act by a completely different mechanism and literally emit light.

Prior to the Renaissance, artists created luminous effects mainly by the direct incorporation of transparent or highly reflective materials. Examples include the gilded surfaces of Medieval Icons, the richly colored stained glass windows of Chartres, or the glass tessera used in the mosaics of Ravenna. By the late 15th Century, with egg tempera paintings still the dominant medium, Northern painters developed the technique of using pigments bound primarily in linseed oil and applied in thin transparent layers over tempera underpaintings. 1 This method of glazing, which was first perfected by Jan van Eyck and marked the birth of oil painting in general, allowed painters to develop layers of translucent, luminous color for the first time. 2 Glazing spread eventually to the rest of Europe and played a major part in the technique of oil painting up through the Classical and Romantic periods, only falling out of favor after the advent of Impressionism and its preference for a more direct approach. Since then it became increasingly draped in mystique and seen as inextricably bound to the world of the Old Masters and more traditional, Classical styles in general. This is unfortunate as it ignores the significant and ongoing contribution of modern artists and materials in extending the possibilities that glazing had opened up and pushing this traditional technique in new directions. 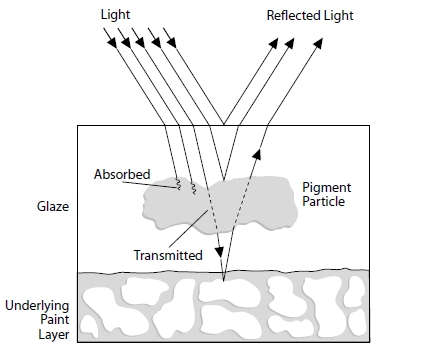 Glazes allow for a unique development of color that cannot be achieved by any other means. A bright yellow, glazed with a transparent red, will result in an orange completely different than if they were mixed together on the palette. There is a sense of luminosity and greater saturation of color caused by the light traveling through one or more translucent films before reaching the viewer. And because it is no longer tied to an opaque surface, color can describe light and atmosphere in many new ways.

The most common visualization of how glazes work has light passing through transparent pigment particles, as if they were pieces of colored acetate, eventually hitting the ground and being reflected back through the paint film once again, like light through a stained glass window. While perhaps useful as a metaphor, the actual mechanics are more complex. To begin with, colors appear transparent primarily as a function of the pigment’s refractive index (see table) rather than light actually passing through the particles. Because the scattering of light is greatest at the boundary of two materials with very different refractive indices, the closer a pigment’s index comes to the medium that surrounds it, the more transparent it will appear. Titanium White is opaque because its refractive index, 2.7, is much greater than the typical binders of oil or acrylic (~ 1.4), so it tends to scatter a maximum amount of light and possess excellent hiding power. Ultramarine Blue, on the other hand, is highly transparent because its index of 1.5 is much closer to the binder’s own. The best colors for glazing, therefore, will nearly always be those that have a relatively low refractive index, like the quinacridones, phthalocyanines, and other organic pigments. Particle size will also play a role as smaller pigments will present a greater surface area to light, giving them a higher tinting strength and allowing even a very thin film to possess rich color. 4 The newer transparent iron oxides are a good example of this, providing the painter an alternative to the more opaque earth colors like Burnt Sienna or Yellow Ochre.

As a consequence of the pigment and the binder having a close refractive index, more light is able to enter the pigment particles where some wavelengths will be selectively absorbed while others are reflected back to the viewer. No longer neutralized by scattered, diffuse light reflected from the particles’ irregular surface, colors appear deeper, more saturated, and richer in tone. What light manages to pass through or between the particles is ultimately absorbed or reflected by the lighter, underlying ground, gaining a second opportunity to interact with the pigment particles before making its way towards the viewer. This complex interplay of light within the paint film creates the particular sense of glow and luminosity that is one of the prized attributes of glazes.

Since the binder ‘s refractive index plays such a critical role in limiting the scattering of light, having the particles well bound in a paint film becomes crucial for creating a luminous translucent glaze. For this reason a glaze needs to be made with plenty of medium to insure the pigment is fully suspended. A 10:1 ratio of binder to color is a good place to start your mixtures. A very common mistake is to simply thin the paint with water, which only leaves the pigments more exposed to the air, where the scattering of light is greatest. Rather than a smooth translucent film, the paint will also tend to create a rougher, matte surface that further dissipates the light and leaves the color feeling washed out.

Lastly, it is important to remember that glazes will always lower the value of the underlying color. Less light, not more, is ultimately reflected back from a glazed surface, so it is important to keep the underpainting or ground at a higher value then you anticipate for the final result. This will also increase the sense of luminosity as more light is reflected back through the paint film.

Acrylics can create a fuller range of luminous effects than any other medium available. It can emulate stained glass when applied transparently over clear grounds like Plexiglas; gilded surfaces with its range of Iridescent colors; the translucent washes of watercolors. Despite this incredible versatility, many artists still look to oils as the preeminent medium for glazing, often leaving the acrylic painter feeling separated from the great traditions and techniques that oil painting created. Contrary to those beliefs, however, acrylics can successfully emulate most of these effects, has a greater range of freedom in application, and better long term clarity and flexibility. And in a fraction of the time required by oils, an acrylic painter can more easily develop complex passages of translucent color. Which is not to say there is no room for improvement. Usually the fast drying nature of acrylics will be seen as the biggest stumbling block, although by using products like Acrylic Glazing Liquid and understanding how to increase open time, acrylics can be kept workable long enough to create very subtle and complex transitions (see our Technical Notes on Drying, http://www.goldenpaints.com/technicaldata/drying.php ). In addition many painters assume the milkiness of acrylic dispersions might make it difficult to accurately judge the final appearance of a glaze since colors might shift in value as they dry. However this effect is negligible and largely indiscernible in the very thin films typically used in for glazes.

Beyond versatility, acrylics have several distinct advantages when it comes to glazing. Acrylic polymers will retain both their clarity and flexibility long past the time linseed oil begins to yellow and becomes more brittle. In addition, as linseed oil ages its refractive index increases, causing many colors to become increasingly transparent and therefore revealing underlying layers that were painted over. This is why pentimenti will appear long after a painting is completed, and many oil paintings will become darker when done on a toned ground. 5In fact, numerous masterpieces have become hopelessly obscured because of this phenomenon. 6Acrylics are also free from the common restrictions inherent in oil painting where rules such as thick over thin, fat over lean, and slow drying over fast, must be strictly followed to avoid cracking. These rules limit the ability of the oil painter to use glazing as part of a spontaneous process and restricts the choice of colors that can be used. By contrast acrylic painters can apply an indefinite number of layers, of any color, and create incredibly complex surfaces in a relatively short time. And lastly, it has by far the widest range of viscosities at its disposal, from the nearly water-thin Airbrush Medium to the thickest of gels.

Liberated from the need to keep glazes thin, acrylics can create dimensional glazes of almost any thickness by adding small amounts of color into our thickest gels. Textural glazes can be made using our Clear Granular Gel, Acrylic Ground for Pastels, or by using a gel to embed other translucent materials into. Some of the newest special effects pigments, like the ones used in our Interference colors, can create ephemeral and illusive effects when added to a gel or glazing medium and applied in a translucent layer. In other areas, acrylic glazes have found increasing roles in such important newer media as giclee and ink jet prints, as well as contemporary printmaking and photography, where the acidic nature of oils would be archivaly unsound. And of course acrylic glazes can play a significant role in the emerging area of multimedia works, where a variety of surfaces and materials must be dealt with, or in sculpture where its durability remains unmatched. In all, while acrylics can certainly allow artists to draw from the past, their advantages make them uniquely suited to extend glazing and its luminous effects into new areas of expression and emerging media.