The full color travel effects are best seen with films thick enough to be opaque, or with thin films over a black ground, or with multiple viewing angles. In both cases, curved, wavy or rippled surfaces will enhance the simultaneous spectrum of colors exhibited. At optimum light reflectance angles, even thin translucent films can appear almost opaque, in all but the Cyan/Violet and Teal/Violet, which seem to require a dark ground to show their colors most intensely. At certain angles the mica particles will appear sparkly and add a spatial quality to the overall effect, with a slight tilt in the angle giving a flatter and less iridescent looking color.
The six colors have been divided into three groups with similar characteristics.

These colors are the most striking in terms of color “flip” because they come close to having complementary color travel, with more than two iridescent colors visible in the transition. It is possible to see violet, blue and green at different angles and all three colors simultaneously on curved surfaces, although the Teal/Violet and Cyan/Violet duos predominate in most situations. Over white, in thin applications, the reddish brown undertone is most obvious, with the Teal and Cyan colors showing themselves as highly variable iridescent blues and greens.

As with many of these oxide-type interference colors, it can, initially, have a general copper-bronze-like appearance. These two Color Travel Interference Colors are very spectacular on rough, textured, or curved dark surfaces in bright balanced light.

Viewed in full, unfiltered sunlight these colors appear as a hot iridescent magenta pink, and a bright warm pink, respectively, gradually changing to coppery orange and yellow iridescent colors as you change the viewing angle. The red can appear closer to orange in sunlight, and become more pink-like under general incandescent indoor lighting. The Copper Light can look like Diarylide Yellow in strong sunlight. The magenta will be cooler or warmer depending on the quality of light, and the copper component can be anywhere between bright yellow/orange to reddish iridescent copper. The striking color flip from hot magenta pink to bright copper separates the Magenta/Copper from the Interference Oxide Red, which has a somewhat similar pinkish iridescent color. At the most oblique angle, both appear as an almost identical brownish orange color.

Over dark grounds this color appears as an iridescent gold and green, and on rippled and curved surfaces or with a full range of viewing angles, the color travel goes from gold to blue to green, with slight amounts of violet. All these colors may not be seen with the paint on a flat surface, or in ambient indoor light. The iridescent green in this color is similar to Interference Oxide Green (Yellow Shade).

Another name for the Yellow/Gold could have been Yellow/Orange, which also somewhat accurately describes the color travel. The yellow may not be seen at all with some indoor lighting, appearing as either a yellow gold or orange copper iridescent color, but in full sunlight, or full spectrum indoor lighting, there can be a striking bright yellow color visible, which can have a greenish look over black, due to optical color blending.

This new oxide color is a darker and cooler version of our existing Violet Oxide. While both the undertone and masstone of the Violet Oxide is reddish, the Violet Oxide Dark leans to the blue in both areas, and compared to the Violet Oxide is much more neutral. Both colors make beautiful tints that could be very useful in portrait and figure painting, or anytime a grayed purple-red color is desired.

These two new grounds are wonderful additions to our selection, and significantly extend the variety of surfaces for soft drawing media, while adding the unique characteristic of a high level of translucency, typically not found with this type of textured surface.

Translucent Ground (Fine) is slightly smoother than the Acrylic Ground for Pastels, while Translucent Ground (Coarse) has more “tooth,” and together they effectively create a family of products with a tightly graded range of surface textures.

Both Grounds grab on to pencil and pastel very well and with a typical #2 HB pencil, it is a little bit easier to get a darker valued mark on both, as compared to our Acrylic Ground for Pastels. In part, this has to do with the translucency of these new grounds allowing for more contrast, but also because of the nature of the solids used to create the subtle textures. Over white grounds, compared side by side, the Acrylic Ground for Pastels is much more opaque with a warm milky gray color, while both of the new grounds allow much of the white to show through, with only a slightly darker, subtle grayish color showing. On a dark or black ground, the Acrylic Ground for Pastels significantly lightens the surface because of its opacity, but both of the new grounds do the opposite: they darken because of their translucency and semi-gloss nature. The one characteristic that may be surprising is that both these grounds are semi-gloss rather than matte. Even with this semi-gloss surface, both grounds take stains and washes fairly well, showing a good level of absorbency.

These products were birthed from a particularly creative and flexible collaborative effort between the GOLDEN Lab, Marketing Team, and Technical Consulting Team. The extended open time, re-solubility, dry film properties, and the resulting subtractive techniques made possible, are the stand out attributes of these products. There is great potential for layering multiple coats of these mediums mixed with paint, and using various subtractive techniques, both wet and dry, to achieve unique color and surface effects. All are absorbent enough to take stains and washes nicely with varying effects, and most have enough tooth to grab onto soft drawing media with satisfying results. Any of them could be used as wet or dry grounds, but since the “Long Open” ones have the capacity to remain wet for extended periods, their use in Plein-Aire Painting, or for any extended paint handling techniques is ideal.

While it is the “workable” properties that are being focused on with these new materials, we fully expect to hear of many other uses and techniques as artists begin to work with these new products. An important reminder is that these are experimental products, and have not been fully tested. For instance, all of the products exhibit a somewhat delicate dry film integrity and it may be necessary to topcoat them for better physical protection.

We settled on four separate products, two that are iridescent and two that are not, with each group having both a long and short open time. 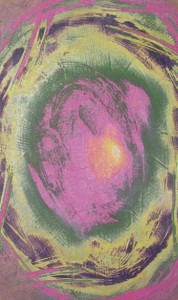 All four of these Workable Mediums will have good re-solubility using water and a soft abrading tool within 24 hours of application. After that, there is some significant variability from medium to medium. The short open mediums dry to the touch in approximately 15 to 45 minutes, depending on the thickness and environmental conditions, and the long open mediums can take all day to dry to the touch. An advantage of the short open mediums is the potential for multiple layering within a relatively short period of time. The advantage with the long open mediums involves any technique where extended working time is needed.

The two long open mediums can both be re-solubilized after a week with water and vigorous scrubbing. The two short open types, however, vary greatly. After a week of drying, the Workable Iridescent Medium could just as easily be re-solubilized using similar techniques as was used with the long open mediums. The re-solubility of the Workable Medium dropped off sharply after three days, and was essentially non-existent at four days. However, it is very easy to remove by carving and scraping into the surface.

For techniques on using these products visit the Golden Artist Colors Web site at www.goldenpaints.com.

View all posts by Scott Bennett →